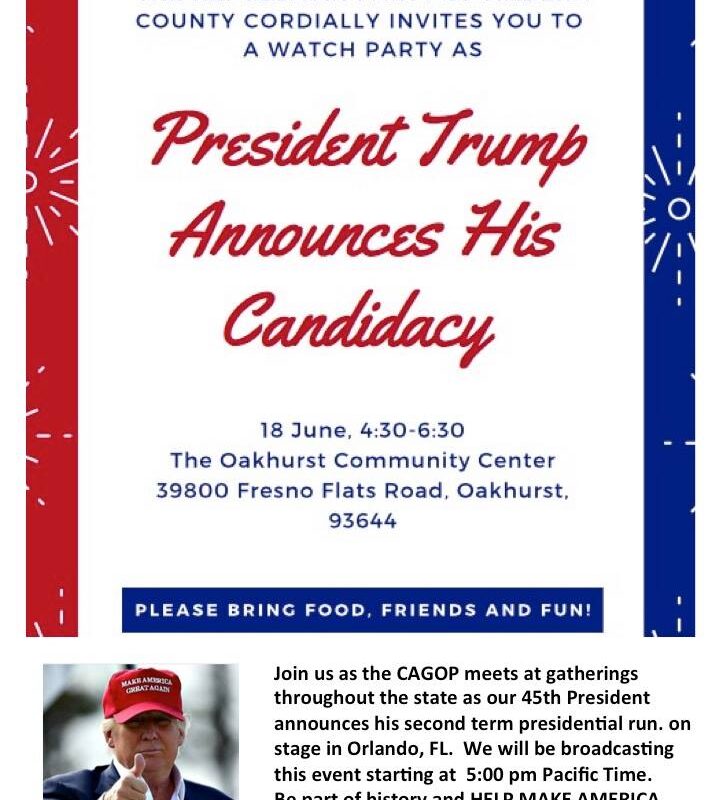 BE PART OF HISTORY as our 45th President announces his 2nd term presidential run, on stage in Orlando, FL. We will be broadcasting the live event which is scheduled to start at 5:00 pm Pacific Time.

This is one of many, CAGOP Official Trump 2020 Watch Parties throughout the state, for Tuesday’s announcement rally.
BRING FRIENDS, FAMILY & FOOD FOR THIS SPECIAL EVENT!

President Trump achievement for the past 2 years are outstanding. In spite of facing tremendous oppositions not only domestically but also internationally, President Trump was able to accomplish so much for this country in trade, military, economy, Supreme Court appointments as well as gaining respect as a leader on the world stage. We need President Trump to be re elected in 2020 to continue what he has started Making America Great, and Keep America Great.

Discuss the many accomplishments of President Trump with fellow Patriots that often go unreported by the Fake News Media as he continues to Make America Great Again.

Please email the Event Pictures to

We will update the slideshow with pictures from the event.